I hosted my first ‘proper’ Live Draw on facebbok yesterday evening. I asked everyone who follows my page to choose between a fox and a retriever puppy. Fox one hands down and I was delighted to get to paint another as I haven’t since I painted Amber quite a few years ago now.

I want to just follow up each Live draw with a brief of what was achieved in the hour so people who want to follow it can use this and rewatch the video again.

The reference photograph can be found here in my Google drive and I decided to crop into him and remove some of the sky to the left for this exercise. I sketched him out to 12×12 inches and used brown pastelmat paper

I always say the eyes are the most important things in any portrait, human portraits, pet portraits, not sure if there are any other types! But if the eyes are wrong you portrait will look wrong. They show the character of the subject and bring them to life. So if there is one thing that needs careful attnetion it is these.

This fox has some amazing colours in his eyes and I have popped a list of of the colours I have used to create them here.

I started with restablishing the shape of the eyes. If you look closely the right eye is darker because it is in shade. We want to pick up the lovely light in his portrait so it is important we pay attention to the shadows as well as the highlights. His left eye has a beautiful catchlight in it as it is catching the light and it makes his eye sparkle with life. It is important we catch that in the portrait.

I use the black pitt pencil to redraw in his eyes paying attention the the black outline is more prominent on the right side due to his eye being in the shade.

I then draw in his pupils. They aren’t round like dogs, they are horizintal lines, well more very thin ovals. Make sure you don’t presume what an eye looks like as you will get it wrong.

I then added the blue to the highlight part but also some dark indigo as you can see there is some dark blue in his eyes too. From there I added in the catchlight to the left eye and the blues also.

The greens for his eyes are stunning against the blues and and oranges in his coat. I think that is what drew me to paint his portrait was these glorious complimentary colours! I didn’t have an exact green so I used my mix of greens in my caran d’ache range and the derwent Olive green and raw umber to get the colours as close as possible.

I try and let the pastel pencils do the blending rather than using my finger. This tends to lead to muddied colours which is often a problem for beginners using pastels and can also transfer grease from you finger to the painting. Nightmare! If you feel it isn’t working and a you need to blend it a bit more a very soft touch with your finger should be enough. Make sure your hands are clean please! You have been warned.

I hope some of you maaged to join me for the second live stream on facebook this afternoon. I had a great hour and 20 minute working some more on this handsome foxes portrait. I think good progress was made. We moved further up his face and started on his ears.

I said in my video it was where my hand took me, but logically I want to get the top finished and try and work left to right to avoid as much smudging as possible.

The ear is a tricky beast as you have fur going in lots of directions that you need to pay attention to and also the depth of field where his ear is slightly out of focus at the back. You want to try and capture that to create depth of field and make your subject 3D.

We will put in this area first and the whispy ear hair at the front will go in after, making sure it goes behind where the white hairs will go, as this gives it the impression they are in front. This being the beauty of pastels as it so eay to lay light over dark. I add them in with a mixture of black and dark grey and I have blended and softened them with both my pencils and using a very gentle finger patting down the pigment to soften the strokes and make them look everso slightly out of focus.

After that is finished we can the move to front of his ear and add in the fur that lies across the front. Again one layer isnt enough. I add some strokes laying out the fur in the direction I want it go and then soften it very slightly. If I feel it needs it I add some more to the dark fur behind and then go back in with a sharp pencil and add some more fine lines for the fur.

It is worth noting I havent used white yet, I have used a very pale cold grey. I will add white for the highlights at the very end. For the dark fur behind, I have used black but I have lightened it everso slightly with a cold grey, as again I really only want the black, blacks and the white, whites to be the final shadows and hightlights.

So finally I have got round to another live draw of Mr Fox. Sorry for the delay, work and other bits have been preventing me getting back to him.

This weeks tutorial has been on his nose. It is quite a straightforward nose as they go as it is very slightly out of focus, so there wasn’t a huge amount of detail to put in, just the impression of.

I used a mix of Faber castell Indigo, paynes grey and black, Carbothello cold grey 726 and 724 and a white.

I also started and did the majorty of the work on his muzzle and the white of his moutn an chin. In fact most of this area is out of focus so there was a lot of blending with my pencils to get the softer look. I could add more detail if I wanted as there was enough information there to add it, but I like the dpeth of field it is creating in the portrait so I have kept pretty true to the photograph.

And the progress photos of this handsome creature. 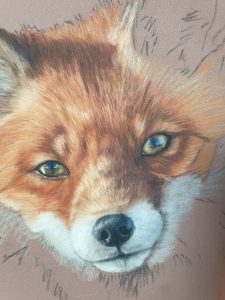 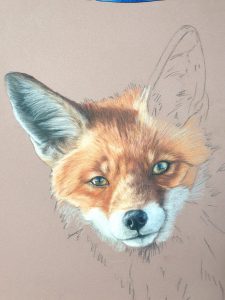