I think in my last blog post I mentioned my two current pet portraits I am working on. Shadie the Cat and Luna the GSD. I had hoped to write a bit of a stage by stage, at least on Luna, but unfortunately I had a parcel that thankfully was only delayed, but cause a lot of stress for myself and my client yesterday and today as you can probably imagine! It doesn’t happen very often, but when it does it creates a fair few sleepless nights and anxiety ridden days. This is in turn can knock my focus a lot.

As a result I have been picking Luna up and down and not really had a chance to focus on her for long periods which has meant in turn it slipped my mind to take some progress shots for you, however I can talk a bit about what I have done!

I am pleased with how the poppies are turning out, how they are coming into focus to create a nice depth of field. This is really important for photos with backgrounds in particular, to make you subject pop. Sometimes they don’t lend themselves to that, but on the whole making part to all of the background out of focus makes the dog or cat or horse really pop out and be the main focus.

The one thing about the red of the poppies is it is tricky to layer over. It doesn’t help that I have used soft pastels, but for some reason the red is proving more awkward. Being that Luna is white I think even my softest pastel pencil is picking up too much of the red of the poppies and making her fur look a little pink in places. I may have to resort to a pastel stick to get it to work, I have even tried my bristle brush on it to remove the pastel, but it isn’t quite enough to allow the pencil to cover it. 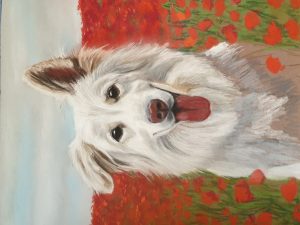 Another sideways pet portrait photo Hahaha. I will try and remember to correct it when on my laptop tomorrow.

I haven’t worked anymore on her today as I had a well earnt day off and attempted my first nordic walk since September. It’s hurting now! And then got taken out to lunch by Dad with my little brother Steve! Back to her portrait tomorrow.

I aslo have a progress shot of Shadies portrait. I hope to have both of these finished by the end of the weekend, along with a large canvas. Probably slightly optimistic, but I may as well aim big. 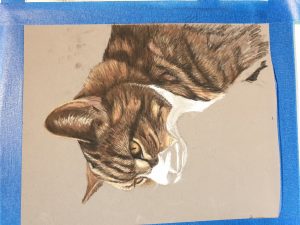 Luna’s portrait was collected this weekend, there were a few amendments to be made due to my client finding another photograph of her. The original ones I had were ok to work from, but were lacking in the detail slightly and you know what I am like for details in my reference photos. I painting pet portraits from photos not my imagination! We also decided to lower the poppies, lighten her eyes and add some more detail to her fur. Unfortunately I didn’t get a final scan as I was making these amendments right up until the last minute as my client was down here for a course.

I will upload a scan of the finished portrait before the changes were made as I think it is always better to see a scan if possible it is so much better than my samsung phone. When I am due for an upgrade I might change as they seem to over sharpen everything. It is horrid and not helpful when photographing pet portraits.